Yesterday I got a question in my twitter feed (@jarwidmark) about how to create a custom variable in MDT 2013 using a script. The answer is, yes you can do that, but you rarely have to, because you can create them directly in CustomSettings.ini to begin with. Anyway, some times it does makes sense to dynamically create custom variables in a script. In this post I demonstrate a few different methods for creating a custom variable.

Going back to the source 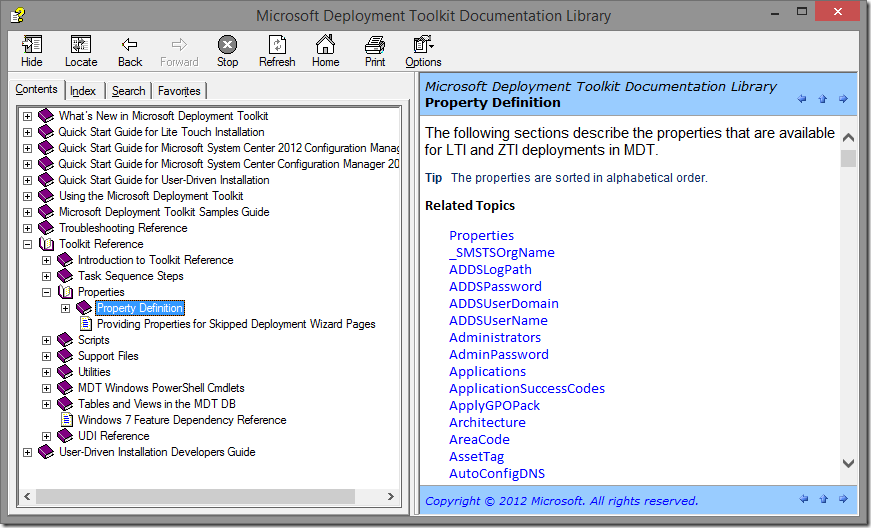 The most commonly used method to create a custom variable is to add it to your CustomSettings.ini file. Here is an example, where two custom variables (or properties) are used for

Creating a custom variable in the Task Sequence

Variables set in CustomSettings.ini are considered global by default, but you can create task sequence specific variable directly in the task sequence by adding a "Set Task Sequence Variable" action. Here is an example showing the custom HydrationMethod variable in a task sequence.

Adding a custom variable to a task sequence.

Creating a custom variable in a script

When needing variables created (or set) in a script, for example based on dynamic conditions, you can do that too by simply calling the task sequence object. This is exactly what the built-in ZTISetVariable.wsf script does, but you also find that most of the other MDT scripts do that as well.

Figured out how to change the language based on the a custom variable we are setting in the wizard. Added the below in CS.ini and modified the Gather step in the TS to gather variables in CS.ini after the HTA wizard. Thanks for all you contribution. You guys rock.
[Settings]
Priority=LanguagePack, Default

We have a custom wizard for Windows 7 created in MDT 2010 integrated with SCCM 2007. I have somehow managed to get the same wizard in MDT 2013 using which we will be deploying Windows 8.1 for tablets (without SCCM).In the HTA wizard we select a location based on which language, locale, time zone etc are auto selected. Language pack has a custom variable called "LanguagePack".Even UILanguage is set with the same values as "LanguagePack" variable (Just FYI) Can you please let me know how to install a specific language pack based on this custom variable called "LanguagePack"?Do i need… Read more »

Indeed, yes, thanks for pointing out that method. I use that a lot for on-the-fly-testing.

Lest we not forget, can always call some custom variables from the command line "Litetouch.wsf /TaskSequenceID:REF-BUILD /CustomVar:CUSTOM" Though more used for static variables, assuming Litetouch is called from some other script can always pass in dynamic variables too…